A four-woman break and the race leader’s disqualification on Saturday at the Tucson Bicycle Classic Road Race led to a shake-up in the Women’s Pro 1/2 field General Classification standings.

A solo rider now finds herself in the leader’s jersey with a professional mountain biker just four seconds behind. No rider from a big team – Hagens Berman | Supermint, nor Sho-Air Twenty20 – is within 25 seconds of the overall lead going into the third and final stage.

After another stage win by Floyd’s Pro Cycling in a sprint finish, the Men’s Pro/1 field GC remains unchanged. 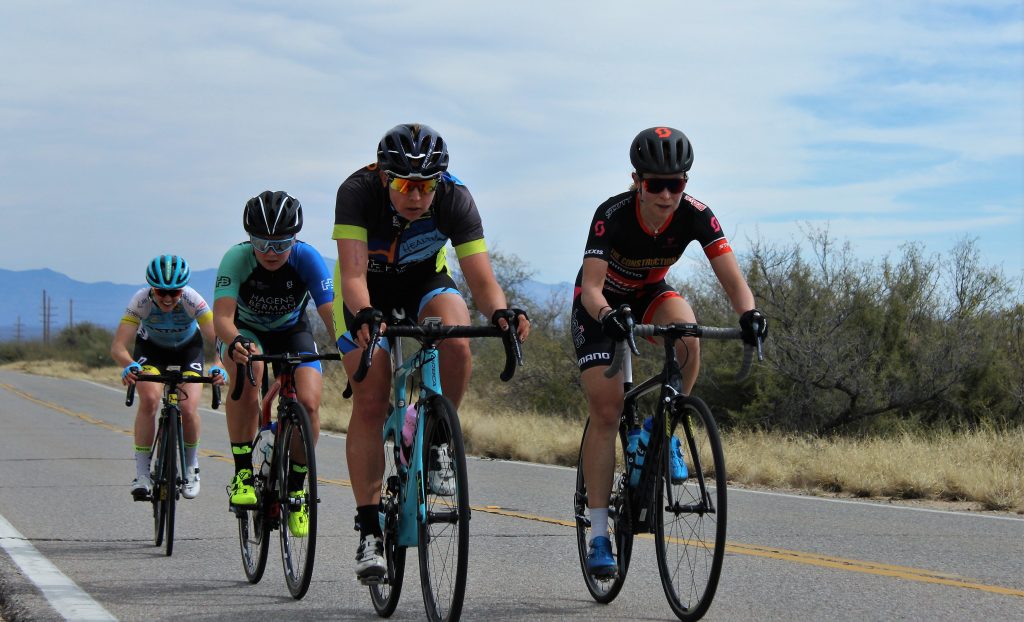 As the wind picked up, efforts to pull the break back failed, and by the final time the riders crossed the line, Huck had broken away in a solo victory with Blais not far behind, then Owen, then Ossola.

“It was a lot of fun being in the break and I thought our group worked really well together,” Huck said. “I figured today was my chance to gain any time on GC, and sprinting is not my strong suit, so I put in a big effort with 1k to go.”

Huck, a short-track, cross-country and cross-country mountain biking national champion and a Pan Am Continental Champion, said she made a last-minute decision to come to Tucson for TBC due to rough winter conditions in Colorado.

“I needed a solid training block before the full MTB season kicks off, and honestly, road racing is a big step out of my comfort zone, which can be a really good thing,” Huck said.

Going into Saturday’s race, Huck trailed GC by 15 seconds and Blais was down six seconds. After the road race, the two climbed up the rankings, with Blais now in the yellow jersey and Huck four seconds back.

Owen is 25 seconds down from getting Hagens Berman | Supermint an overall win, virtually an impossible task if relying on time bonuses only. Owen will have to break away to overtake the lead. If she doesn’t, it will be one of the rare occasions when a solo rider or a rider with a small team is able to out-gun a large team contingent at TBC.

“We had a good group in the break, and I’m glad the girls all wanted to work together so we could stay away,” Blais said. “Tomorrow is another day.”

Blais said she is happy to see her form coming along, which happened to be enough to surpass the firepower of larger teams.

“Well, I raced as an independent long enough – trying to get on those big teams – I know how to use that to my advantage,” she said.

Goldman, who finished the race with the peloton, said her team appealed the ruling. Later in the evening, the ruling was overturned and Goldman and Nerlo were reinstated. Goldman’s position in GC was fourth and 39 seconds back.

After multiple breakaway attempts, the Men’s Pro/1 field finished in a bunch sprint that sent Floyd’s Pro Cycling’s Travis McCabe through to victory and kept the yellow jersey on the back of his teammate, Serghei Tvetcov.

“Today pretty much went as planned,” McCabe said. “We didn’t really want a big break to go up the road but expected something. We tried to split the field a couple times in the cross winds, but nothing really stuck. So it came down to a sprint.”

McCabe said the sprint, which was into a strong headwind, was all about timing.

“Sergie and Nick led me out, and we were able to go first and third again today, so everyone is happy,” McCabe said. “So far the racing is going as planned and we will continue to take responsibility tomorrow.”

Team director Gord Fraser said he wanted to integrate two riders fresh out of the junior ranks – Canadians Miles Carson and Robin Plamondon. The two went to the head of the race and set the pace leading into the finish.

“We defended well, kept the race under control for our sprinter Travis which was our primary goal,” Fraser said.

Time bonuses are available for three, two and one seconds during an intermediate sprint as well as 10, six and four seconds for the finish.

Photos complimentary with a tag to Clipped In or clippedin.bike on social media.