A bullet to the back: What happened at Seven Springs

A bullet to the back: What happened at Seven Springs

“I heard a pop like a tire blowing and a whizzing noise, and then it hit me in the ribs right underneath scapula.” Danny Matchett knew he had been shot.

Even though the hit pushed him hard to the left, he somehow managed not to crash. He unclipped his left foot, put it down, and as the pain raced through his body, he began to moan.

His wife, Chrissy Saraceni, pulled over and asked what was the matter, but Matchett could barely speak. Saraceni, a doctor, took one look: It was a bullet wound.

It was clear and sunny with hardly any wind on Nov. 25, the Sunday after Thanksgiving. Matchett and Saraceni, who had moved to Carefree, Ariz. from Pennsylvania for Saraceni’s job, but also for the riding, were out on a 40-mile easy spin together, Matchett said.

They headed out on one of their favorite routes – Seven Springs. It’s one of the more popular rides for road cyclists in the Phoenix area. It’s the icing on the cake after a long, slow ride up Cave Creek Road. Short, punchy climbs and swift, turning descents on deserted roads with views of the Valley for miles.

“We love the open roads, beautiful desert, long stretches, being with other people who love the same,” Saraceni said.

from millions at MapMyRide

The two experienced just that, and when they reached the end of pavement at Seven Springs, they turned around and headed for home. They came up the final hill, and at about 12:45 p.m. and an eighth of a mile before Raven’s View Wine Bar at Cave Creek and Old Mine roads, Matchett had a bullet in his back, he said.

“I thought he blew a tire, [and] when I heard him moaning and not responding to me, I knew something bad happened,” Saraceni said. 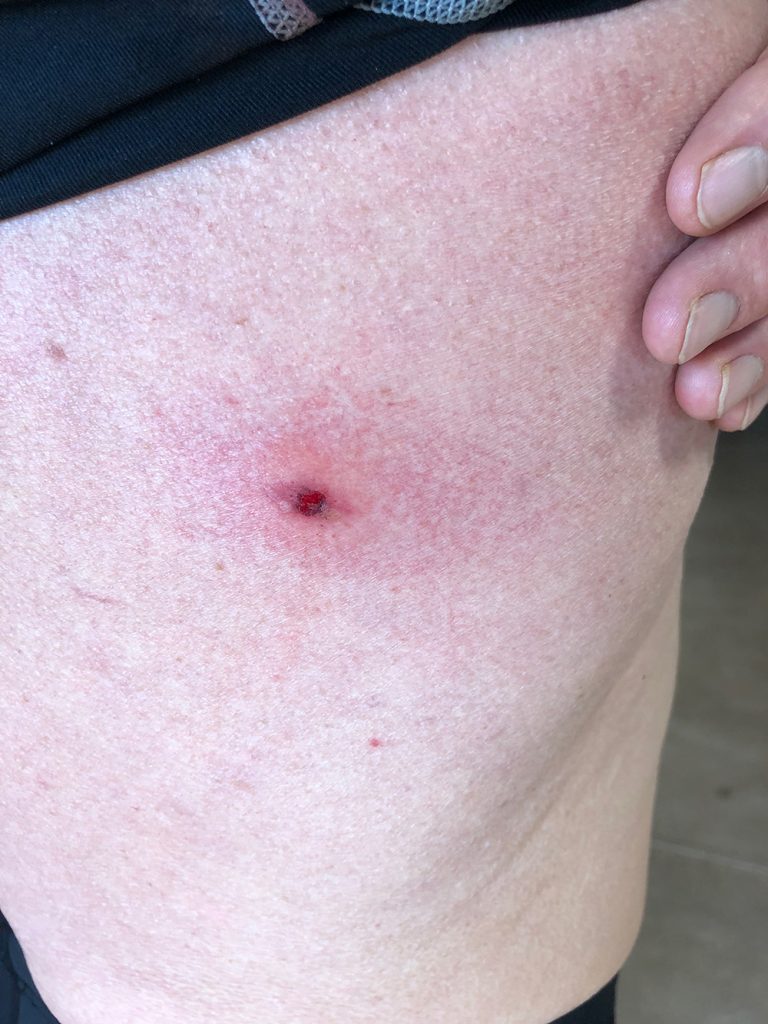 A photo of Matchett’s bullet wound, provided by Matchett.

Matchett was in pain, but he wasn’t losing a lot of blood, and he could move, he said. He was shot, but at that point, he didn’t know yet with what. Saraceni asked him what he wanted to do. Another cyclist was riding by.

Matchett and Saraceni said they then decided to try to go to the ranger station near Bartlett Lake for help, but it was closed. Instead of calling 911, Matchett said he and Saraceni decided to ride the five miles back home.

“I just wanted to get home – when the ranger station was closed – I just very angrily said I wanted to go,” Matchett said. “It comes back to being hard-headed. I didn’t want to stay there.  If it’s a lunatic they could get me again. We just gotta get out of here.”

Saraceni said it took a little time for Matchett to get over initial pain and shock.

“He is very stubborn and would have to be unconscious before getting into an ambulance,” Saraceni said.

Matchett said the pain consumed him as he was riding home – he tried not to breathe as deeply because it made the pain worse. 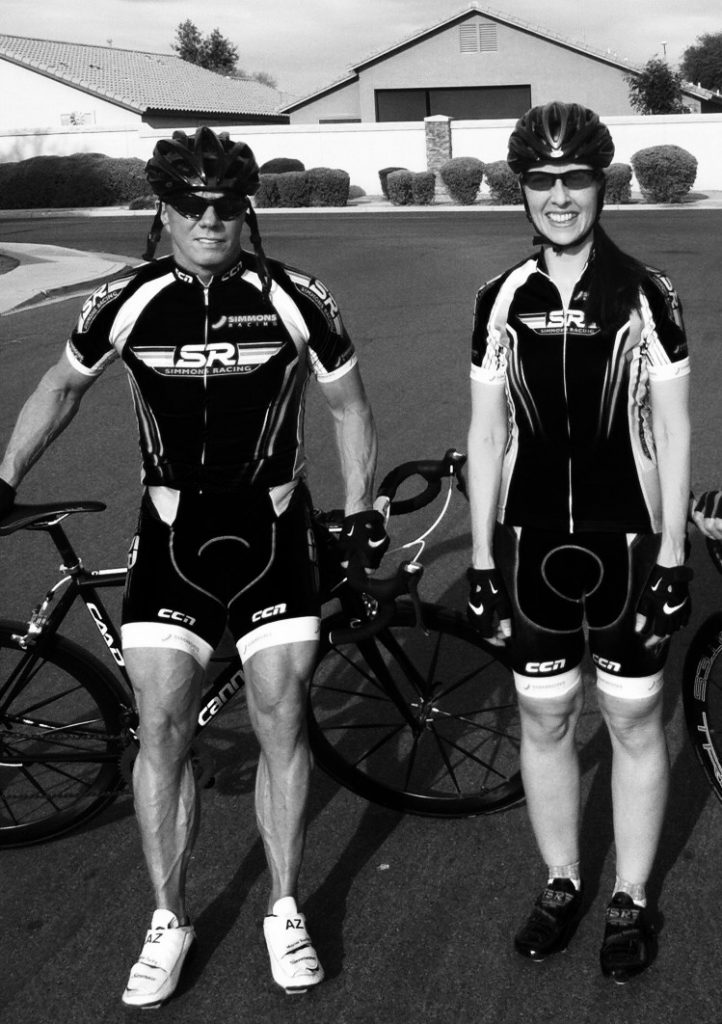 Who you gonna call?

When Matchett and Saraceni finally made it home, they said they tried to figure out which police agency to call. Carefree, where they live, is an unincorporated town without its own police department. Nearby Cave Creek is the same.

Finally, they realized their home and the location of the shooting was under the jurisdiction of the Maricopa County Sheriff’s Office, Matchett said.

The Sheriff’s Office dispatch received a call at about 3:15 p.m. from a woman who said her husband had been shot when they were riding bikes earlier in the day, a spokesman said. Deputies came out to the couple’s home and met with the victim, who they saw had a small puncture wound on his back, according to the spokesman.

Deputies then went to the location of the shooting but were unable to locate anyone or see anyone in the area.

Matchett finally went to a hospital in Scottsdale, where doctors performed a CT scan and an X-Ray.

Medical imaging showed a bullet lodged in his back with no exit wound. Doctors decided not to remove it, Matchett said. 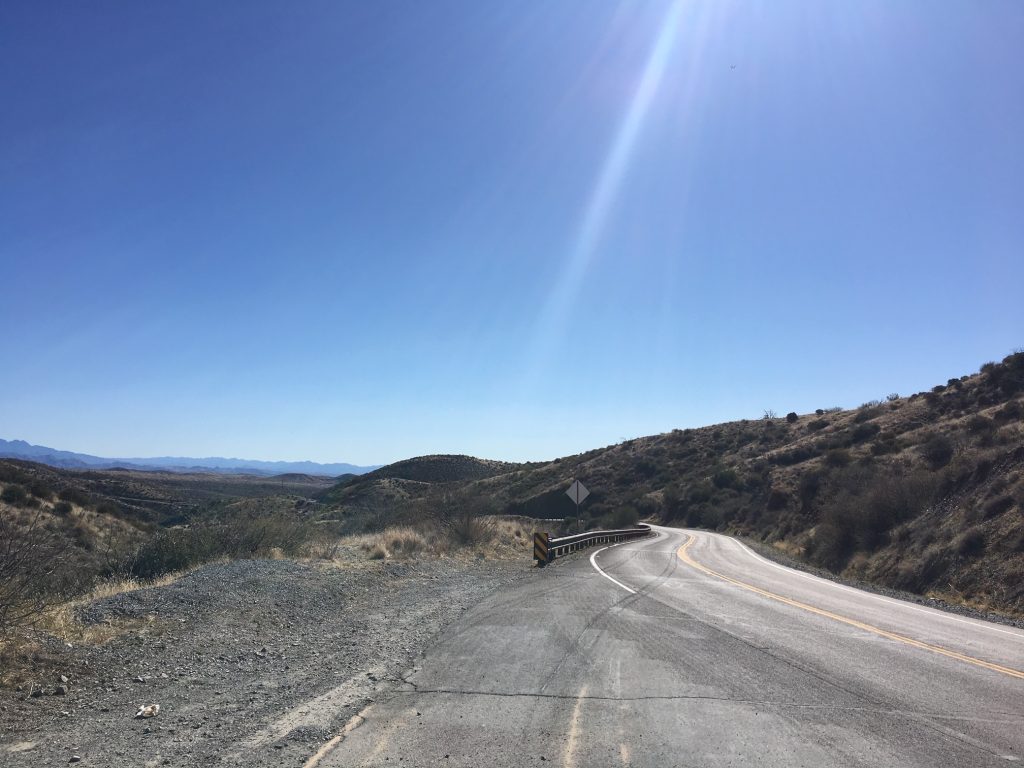 The view leaving “end of pavement” at Seven Springs to head back toward Carefree.

Was he a target?

Matchett began riding bikes 10 years ago, when he began cross training for inline speed skating. Matchett said he has earned many state, regional and national titles in his 30 years in skating. His email address includes “quadzilla.”

“Then I realized my skating was helping cycling, not the other way around,” Matchett said.

He began racing bikes on the road and on the track, and soon he was beating everyone in the sprints and upgrading to a Cat 1 on the track, he said. He and Saraceni, a former pro cyclist, originally moved to Phoenix in 2005, he said. They ride almost every day together, Saraceni said.

The two moved back to Pennsylvania in 2009, but they missed riding in sunny weather and on beautiful roads and came back two years ago.

“Cycling has been a part of my life since [my] teenage years. I started racing mountain bikes in 1996 and road bikes a few years later,” Saraceni said. “[I] love the people, camaraderie, physical and spiritual health cycling gives.”

Matchett leans toward thinking the shooting was intentional.

“Do I think they’ll ever catch him? No.” Matchett said. “Do I hope it’s random? Yes. I think it was on purpose, but Chrissy looked at me like, ‘did we make anybody angry at us, like a car?’ We only saw two cars.”

Saraceni said she’s not sure if it was a targeted assault.

“I hope it was an accident and that people use good judgment with their firearms,” she said. “I’ve taken care of many patients who were victims of gunshot wounds during medical training and trauma rotations. I never thought it would happen to my husband doing something we love.” 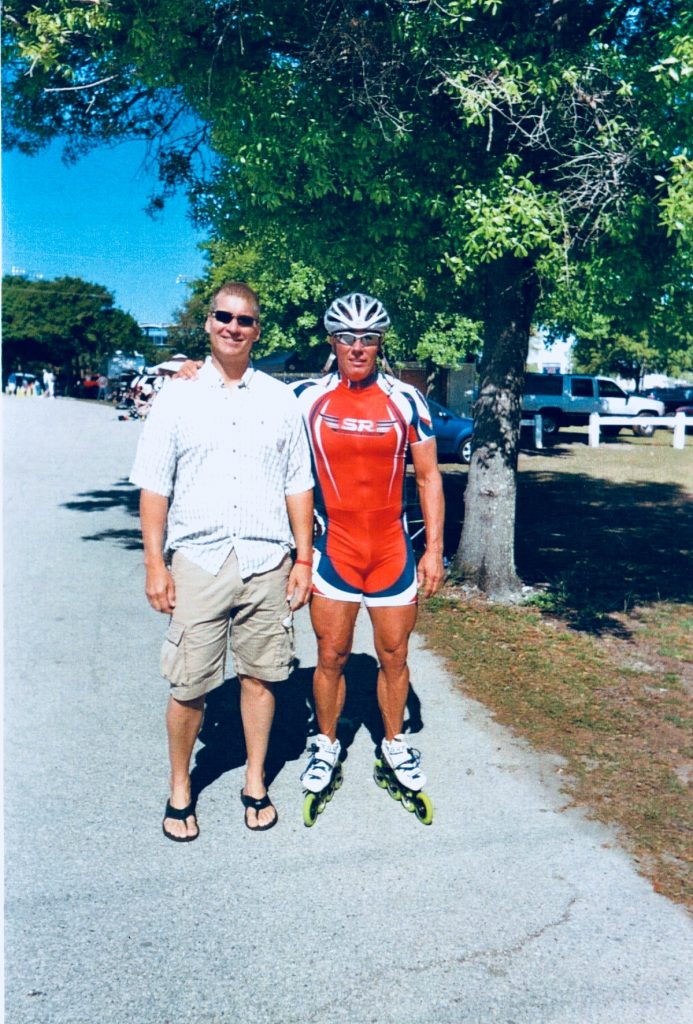 Back on the bike

Matchett said he’s not going to let what happened stop him from riding at Seven Springs.

“I wanted to quit after this,” Matchett said. “I wanted to quit because I’m so scared for my wife. Inches away from her head, my head. I got lucky I’m alive. But I love cycling. I just can’t quit.”

He said he considered riding mountain bikes instead. He said he asked Saraceni,”If you took a bullet in your back, would you quit?” She said “no.”

“So I said, no. We’re not quitting,” Matchett said.

Matchett said he hopes he’ll be back on the bike and ready to race after the holidays.

If you have any information, you can contact the Maricopa County Sheriff’s Office here.