Brandon McNulty attacked out of a decimated peloton with 15 km remaining in Stage 3 of Il Giro di Siciliato to claim a rain-soaked victory on the streets of Ragusa, Italy.

The 21-year-old made it over the Serra di Burgio climb in an exclusive group that included teammate Gavin Mannion, before going it alone and claiming a solo victory.

“It feels incredible,” McNulty said. “I’ve been working towards this for the last few years so to finally get that first pro win is really nice. Hopefully, there’s a snowball effect for the rest of the trip!”

Rally UHC Cycling has now finished inside the top 10 on all three stages in Sicily.

“The team has been incredible this week at supporting both Colin Joyce and me,” McNulty said. “Constantly keeping us topped up with food and water and making sure we always have the necessary clothing. We’re always in a good position leading into key sections and I don’t think I’ve had to touch the wind once this race which is huge on these long hard days.”

The decisive move came when McNulty saw a drop in the speed of the front group at 15 km remaining and the Arizona native took full advantage of the situation. 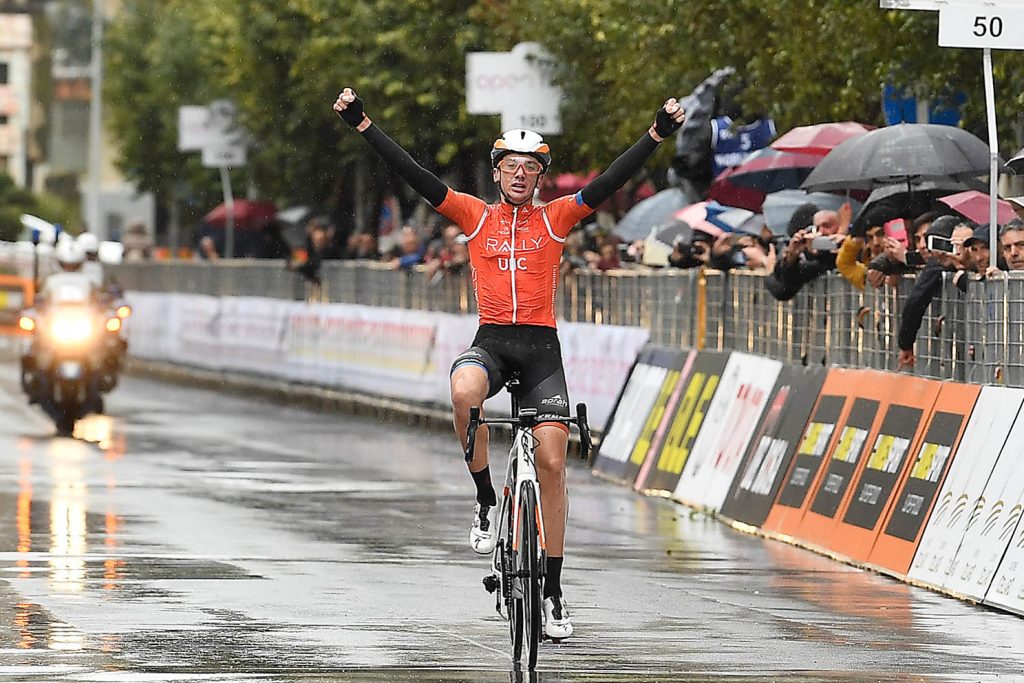 “Pat McCarty radioed Gavin Mannion and I telling us to look for any opportunity after cresting Serra di Burgio,” McNulty said. “Gavin started following moves and when there was a swell in the group, I slingshotted off the front. I hit the wet descent and took the necessary risks to help grow the gap. Once I hit the final climb, I knew I probably had it and just went as hard as I could to the end.”

Team director Pat McCarty said he was proud of the team’s effort and recognized the significance of their achievement.

“This is our first stage win and leader’s jersey at a UCI 2.1 event in Europe,” McCarty said. “What it means is that we are an American team that can compete at the highest level in Europe. It wasn’t just one guy today, the whole team rode incredibly well in support of Brandon and he followed through phenomenally well.”

When asked what the team’s plans were for tomorrow’s decisive stage to Mt. Etna, McCarty went straight to the point.

“Of course we will defend the lead because we are the team to beat,” McCarty said. “I think everyone is confident we are capable of getting the job done.”