One second separated the two going into Tour of the Gila Stage 5, and the race was an epic power battle that ended with Dygert Owen shaking after she crossed the finish line; she pushed her body to the limit, fighting to catch Chapman and keep the leader’s jersey.

“My team rode perfectly today,” Chapman said. “We weren’t too stressed about a break going; in fact, that actually helped us. It was always going to come down to that climb and who could go long on the climb. I just picked a moment when I felt good after my team had led me out and got a good song in my head and chipped away to the finish line.”

Dygert Owen said her team had a plan going into the final stage, but in the end it didn’t work out.

“Brodie had a super strong climb and was able to hold it over the top and keep it,” Chapman said. “We did all we could, and we still ended up with the Sprint jersey and Best Young Rider, so we’re happy about that, and we still got team GC so it was a good day for us. I wish it could have worked out a little bit better, but I’m not a climber.” 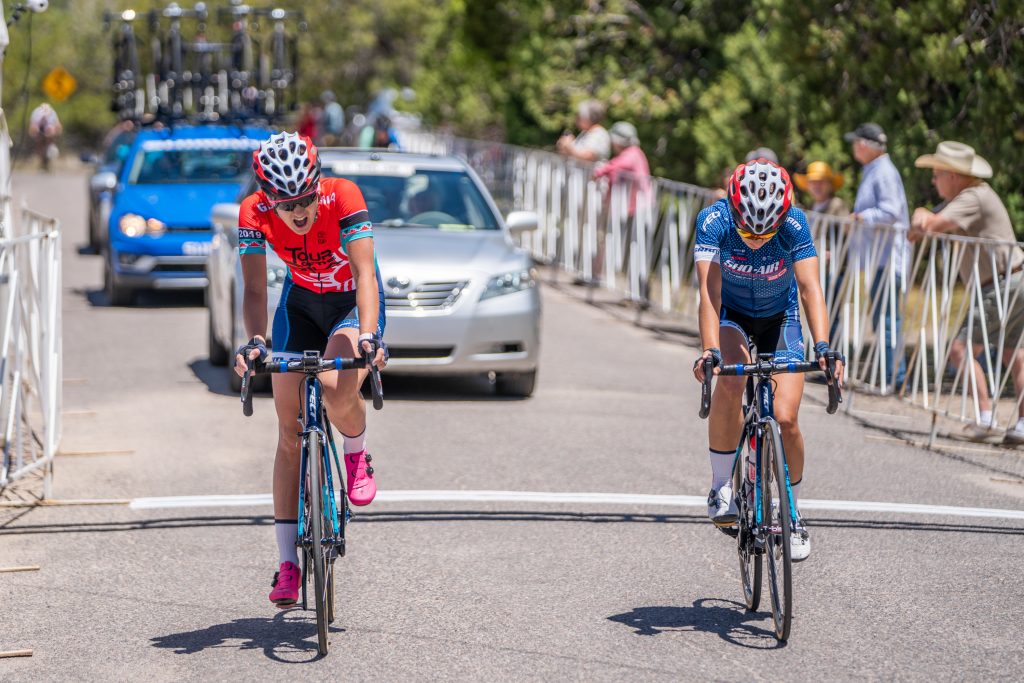 The 65.9-mile Gila Monster Road Race presented by SkyWest Media climbed more than 5,610 feet, and Dygert Owen, with only a one-second advantage on GC, again was ready to pick up maximum bonus seconds on the two intermediate sprints of the day.

She came across the line first to pick up three seconds, ahead of her teammate, Erica Clevenger, who did her job to steal two bonus seconds from Chapman. But Chapman was able to pick up third place, for one bonus second.

But with 20 miles to go, the break began to splinter as they approached the second QOM, and back in the field, Chapman’s team was setting up to launch her off the front. At one kilometer to the QOM, Chapman was off the front and 20 seconds from the lead group. At 200 meters, Chapman caught Clevenger and Franz, the lone leaders, and passed them to pick up first-place QOM points. 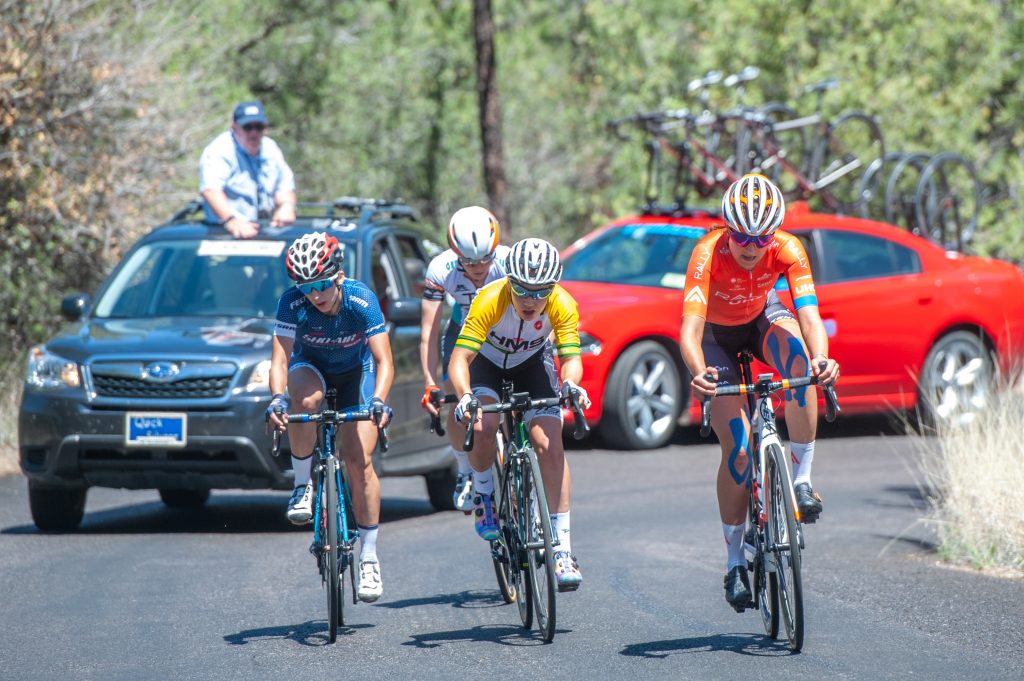 “I was just thinking about my own legs and ‘I feel good, come on you got this, I feel good, legs are fresh’,” Chapman said. “There’s no room at that point for doubt, even if it’s convincing yourself that you’re awesome.”

After the QOM, it was a matter of survival for Clevenger and Franz, who attempted to match Chapman’s pace. Franz eventually lost contact. Clevenger, who was a key teammate for Dygert Owen, would be the final rider Chapman would tow along for the rest of the race.

“I heard Brodie was coming up the road on the climb, and I tried to stay with her as long as I could, but she’s such a strong climber,” Clevenger said.

With 10 miles to go, Chapman finally dislodged Clevenger, but Dygert Owen and the field were gaining ground, closing the gap down to 20 seconds. At this point, Dygert Owen was up three seconds on GC due to the time bonus she picked up earlier in the race.

With 10 kilometers to go, Dygert Owen closed the gap down to 15 seconds as what was left of a splintered chase group fell off the back. Krista Doebel-Hickok (Rally UHC Cycling) latched onto Dygert Owen’s wheel.

“I knew they were coming, but I can only do what I can do, and I had to dig deep in the last three [kilometers] because I felt them coming, and it’s not over ‘til it’s over, so I tried to take it all the way to the line,” Chapman said.

In the closing kilometers of the race, Dygert Owen had Chapman in her sights as they continued to climb to the finish. 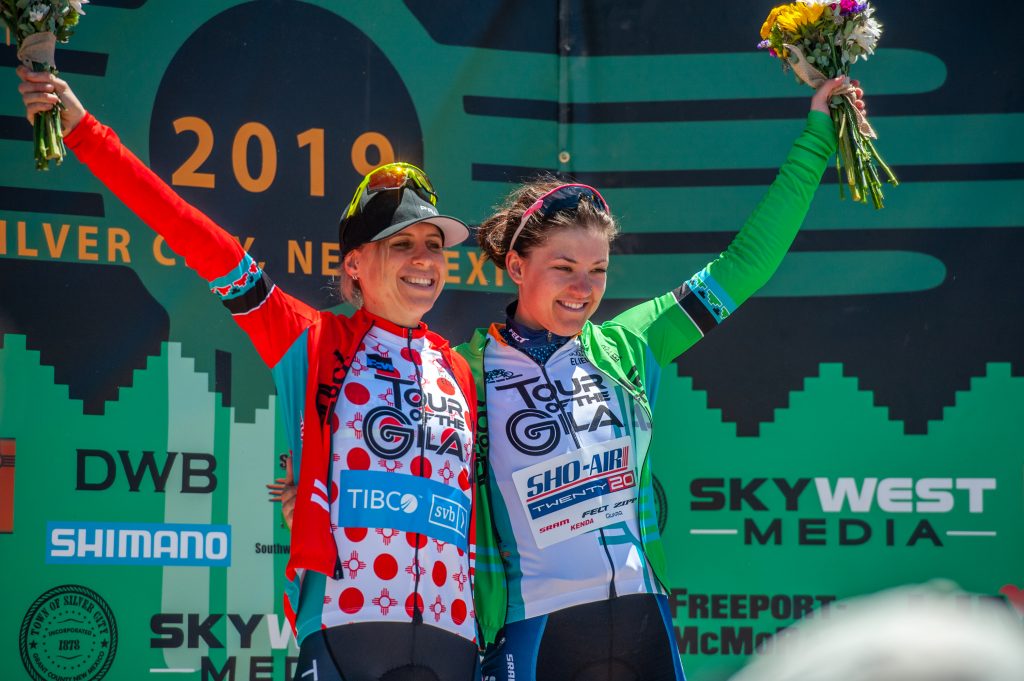 But Chapman proved to be too strong. She pushed toward the finish as Dygert Owen gave it everything she had. Doebel-Hickok and four other riders passed Dygert Owen in the last kilometer, putting her in seventh place on the stage and one minute and seven seconds back on GC.

“I just had to really work on making sure I got over the climb today, and I did, but Brodie’s just so strong she was able to keep that gap and got the win,” Dygert Owen said. “This race is super good fitness for Tour of California. Just to see how positive we all came out of this and how strong we are as a team, I’m really looking forward to California.”

Chapman said she enjoyed racing in a brutally strong field.

“[Dygert Owen] is a legend,” Chapman said. “Obviously, it feels good to win the race, and it feels even sweeter when you’ve got really hard competition. And she wasn’t the only hard competition out there. Every team gave something, and that’s what makes good racing. We don’t want easy wins — we want well-fought wins.”

Queen of the Mountains