Stephen Bassett upset the pre-stage favorites on the queen stage of the Redlands Bicycle Classic Friday, timing a late attack on the decisive Oak Glen climb to perfection.

“I hit him around 300m to go. I had been on Kevin’s wheel,” Bassett said. “I knew you have to wait when it’s that steep. That was a little earlier than I wanted to go, but I think everybody was on the limit. There was a headwind, they’re pro, and I’m not. They were doing the lion share of the work while I was holding on for dear life.”

With three kilometers to go, Bassett played the waiting game behind Vermaerke, whose performance moved him into the yellow jersey, and Frayre as the duo traded attacks into the wind.

“It’s huge, I’m really happy,” Bassett said. “Especially with First Internet Bank Cycling. We connected over the off-season and they have done a lot to make sure I had everything I needed, from equipment to training, to getting me here. It’s huge to do something like that, especially as an amateur team, and with Jarret (Oldham) doing so well the first day.”

Despite the relatively large lead, Hagens Berman Axeon controlled the peloton and eventually, brought them back right before the final climb. Simmons was the last rider from the original breakaway to be caught, succumbing to Hagens Berman Axeon’s pressure with five kilometers to go.

“The climb, we knew it was going to be critical, but our guys, Cole (Davis), Eddie (Anderson), and Thomas (Revard) rode awesome the entire race, keeping the break in check and bringing it back in the final kilometers before the climb,” Vermaerke said. “Thomas was riding tempo for me. I was supposed to ride tempo for Sean (Quinn), but at the bottom of the climb he cramped up, so that was a bummer. We controlled the whole day; the team rode amazing.” 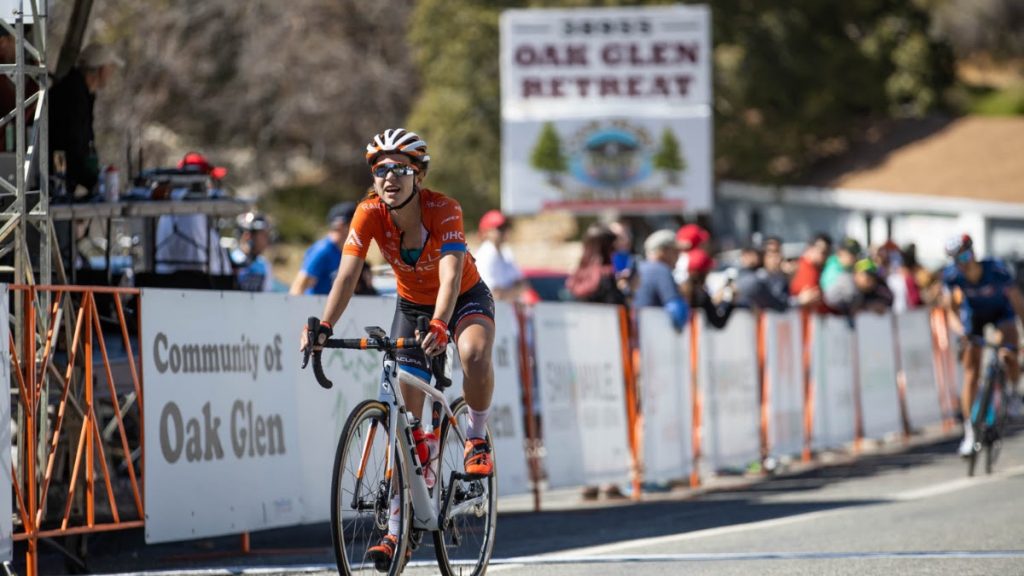 Krista Doebel-Hickok claimed Rally UHC Cycling’s second win of the week on Stage 3 after a late surge in the closing meters of Oak Glen ascent. The 29-year-old climber saw her opportunity to accelerate with 500 meters to the line, putting 44 seconds into eventual second place, Emma Grant (Sho-Air TWENTY20).

“It was the plan to make the GC riders have to work a bit before the climb,” Doebel-Hickok said. “On the climb, we had several different plans of attack. Sara Poidevin and I were a one-two hit, but it was never really a hit. It was more steady and hard. We kept attacking, and the group got smaller and smaller.”

Doebel-Hickok’s performance boosted her into the Queen of the Mountains jersey, which she holds by one point ahead of race leader, Amber Neben (Trek-Red Truck Racing).

“I’m pleased,” Doebel-Hickok said. “I knew that I had great form, but I’ve had great form at so many races, but I’ve never come this far. I think it gives me a lot more confidence in the support that I have here to take advantage of my form. It’s a really good feeling going into the rest of the season.”

After today’s stage, Neben held onto the yellow jersey and now sits 39 seconds ahead of Doebel-Hickok, who moved up to second place on GC. Emma Newsom (Team TIBCO-Silicon Valley Bank) is third at 1:25 back.

In the latter part of the stage, with Oak Glen climb looming, the peloton began to draw the breakaway back, and Anna Dorovskikh (Amy D Foundation) saw an opportunity to bridge across to the six.

“When I saw them, it gave me a little boost to bridge that gap,” Dorovskikh said. “So I did, and hung on to the breakaway until we were caught on the climb.”

Dorovskikh’s efforts lifted her into the white amateur jersey and 19th place on GC.

With the breakaway caught at the base of the climb, it was a free for all to the finish line, and only Grant could stay on Doebel-Hickok’s wheel as the gradient rose.

“I was just trying to focus on my breathing and meditate on the hub in front of me,” Grant said. “I quite surprised with how it developed in the last three kilometers. The team attacked, and Amber (Neben) couldn’t go because she’d been pulling all day.”

Stage 4 and 5 will be streamed live free of charge at cyclestream.tv, with a link available on the Redlands Classic website. Coverage begins Saturday at 1 p.m. PST. Streaming sponsored by Wildlife Generation and Cycle Stream TV. Cycling announcers Brad Sohner and Dave Towle will provide commentary.